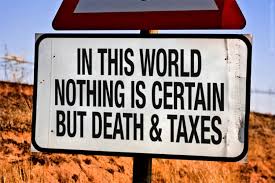 The phrase death and taxes doesn’t sit right with me; I’ve never once been on the phone to Tax Credits, usually multitasking the pots with putting a wash on while on hold for 20+ minutes, the phone cradled between my shoulder and ear, and some scythe wielding deity of the underworld has materialised in my doorway to steal my mortality.  I’m pretty sure that whilst my entitlement to Tax Credits may fluctuate, there is no wavering when it comes to death and its promise of finite silence.

Rather frustratingly there is no trade off with death, no matter the fortune we might have amassed in this life there is no leverage with which to bargain.  It even approaches with the stealth moves of the sneakiest of ninjas.  Being a bit of a geek (spoiler alert) growing up, I had this romantic notion that if someone I loved died, it would be when they were appropriately ancient and even more wrinkly than my prune transformed toes when I lost track of time in the bath, that I would have time to voice my devotions to the person I was fated to lose.

My rose tinted spectacles didn’t prepare me for the morning I found my nan on the floor of her room, her head looking to one side of the little footstool she was fond of resting her moccasin encased feet upon.  Time bends in these situations, those few seconds spent attempting to process the scene before me felt like hours; dragging my numb limbs up the stairs to get my father became a physical feat of endurance.

There is no dress rehearsal for death, but despite this being my first encounter with it, the strange thing is I recognised it, I felt it.  I acknowledged its transformative power the moment I stepped foot in her room, the language of her body, as though entombed in glass, and in the tinny sound of her last breath as her body mechanically expelled it in response to failed attempts at CPR.

We became acquainted again when the medical professionals chose to turn off my dad’s life support and his soul drifted from this world to pass into another, whatever it is that lies beyond this mortal realm – don’t worry I’m not about to break out the incense and start chanting.  It took many years before I found anything in death but pain and bitterness.

The #keepyourchinupbrigade are wrong, time doesn’t heal all wounds, but that unseen hand at your back, guiding you ever forward, will sheath it with a thin gauze, but you will always carry the scar.

Time also brings perspective.  When I was little I remember bolting upright in bed with such force I hit the slats of my sister’s top bunk as the realisation of death seeped into my vivid imagination, together with the associated creepy crawlies as my body rotted in the ground.  The pomp and ceremony of the church provided little comfort to curb my anxieties toward morbidity. It wasn’t the threat of insects feasting upon the wealth of my flesh that alarmed me the most, it was the silence, the finality of it that I could never accede.

But some silences have their own volume.  The silence after lovemaking, souls intertwined, when heart and body give up their secrets; that is at least when the act isn’t interrupted by pesky kids and you have to advise your other half to “hold that thought” while you sort them out and then jump back on.

I don’t know when it happened but I started to find a sound in the silence, an ethereal grace to it, an otherness. Then I began to see it too; in the way the barest of branches so harshly stripped in winter revive come spring, in the pressure of the atmosphere before thunder, the extraordinary of the seemingly everyday.

The truth is no one ever really dies, unless they leave our hearts, especially our kin.  Our bloodwork carries their history within our own, a galaxy of stories and mannerisms transported through DNA.  I know it through my babies unborn, lulled into eternal sleep.

What if death isn’t an end, what if it’s merely a reveal; souls uncloaked, the bonds of bone and skin broken and discarded in our ultimate act of metamorphosis.

Love finds us and binds us, its strength immeasurable, it defies time and transcends the trappings of mortality, whether a heart beats or our flame is extinguished, its light burns forever.

One thought on “Death And Taxes”