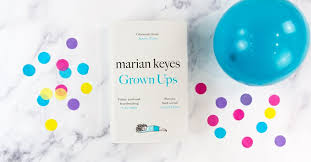 T&Cs: right, let’s get the ‘small print’ out the way with first, I’m a ma-hoo-sive fan of Miss Keyes so naturally you may think I’m not exactly an impartial referee to judge her latest book Grown Ups I can assure you I’ve never been any good at acting (I was always a tree or some other non-speaking background feature at the school play) and I haven’t the front to recommend something I haven’t loved myself, like those scrummy Lindt balls.  I just love the woman, can’t help it, the heart wants what it wants.

However, to prove that I’m not completely bias, I will confess the only book of hers I don’t possess is Saved By Cake and that is more depressingly down to the fact I’m about as much use as a chocolate fireguard when it comes to baking!  I always panic when the school want cakes for the fair at which point my mum is guaranteed to chirp up how she managed to bake for cake sales with three kids.  But you know what, I’ve accepted it now, I just buy a dozen fairy cakes for a quid and let them run riot with the toppings (decorating is the best bit anyway).

Now I was a little apprehensive starting Grown Ups as Marian’s previous book The Break had wrestled its way to the top of my affections, so I was unsure it might suffer the ‘second album curse’ and pale by comparison but I needn’t have feared, it was more than I could have hoped for.

If you’ve checked out Grown Ups online or even better, picked it up off the shelf and felt all its glorious weight in your palm, you might notice that baby got back so to speak; it’s no snack, it’s the whole damn meal as Lizzo would say. Let me slay your fears; unlike some other tombstone novels where it can become a bit of a chore as the halfway line stretches out and your attention span wanes (come on we’ve all been there, you’re enjoying it but it feels like you’ve done some sort of trek for comic relief only without the plaudits or Interflora bouquet at the end) Grown Ups keeps you constantly entertained and thirsty for more. I genuinely found myself slowing down to make it last longer, a method I normally reserve for my Sunday roast or once, a family sized chocolate gateaux (I was pregnant at the time and they do say breakfast is the most important meal of the day).

I won’t ruin your fun and give the game away as I hate plot spoilers *look away now* and all that, what I will say is like a lot of Marian’s books, you find a little bit of yourself in the characters and I drew many parallels with my own life; grief, estranged family, an unhealthy relationship with food (even now I’m guilty of ‘the scan’) yet despite some of the darker topics, the wit which drips from her writing prevents it from becoming too heavy.

In fact I’ve become so enamored by the characters I might start one of those online petitions the young trendy types with their e-ciggies are always banding about and demand an encore *takes deep breath and chants “we want more, we want more!!”*

The biggest compliment I can endow it is that despite my head going south and my GP prescribing me the antidepressant equivalent of Paddy McGuinness: “Lights out, all out”, I managed, just about, to finish it in between cat naps on the sofa. Prior to that I had briefly entertained the notion of finishing Grown Ups with a luxurious bath but instead I woke up at quarter past 1 in the afternoon under a pile of coats clutching it as Gollum would protect his ring.

Right, I’ve said my two pence worth, I’ll leave it to your capable judgement to decide, I don’t want to put pressure on you, I just think you’d be well suited. I can picture you with Grown Ups now, snuggling up on the sofa, a hot chocolate next to you on a coaster (because you’re not one of those monsters who uses a book) a couple of biscuits for dunking (3 really is the magic number for biscuits; 1 is never going to happen and 2 just isn’t quite enough) singing: I like big books and I cannot lie, those other bookies can’t deny, when a spine walks in with an itty bitty waist and a cover in your face you get sprung.

Just don’t let your post man catch you singing that tune whilst you creepily sniff pages with fervor, our relationship hasn’t recovered since and I swear he’s leaving packages with my neighbours even when I’m in.

On that awkward note I shall bid thee farewell for now